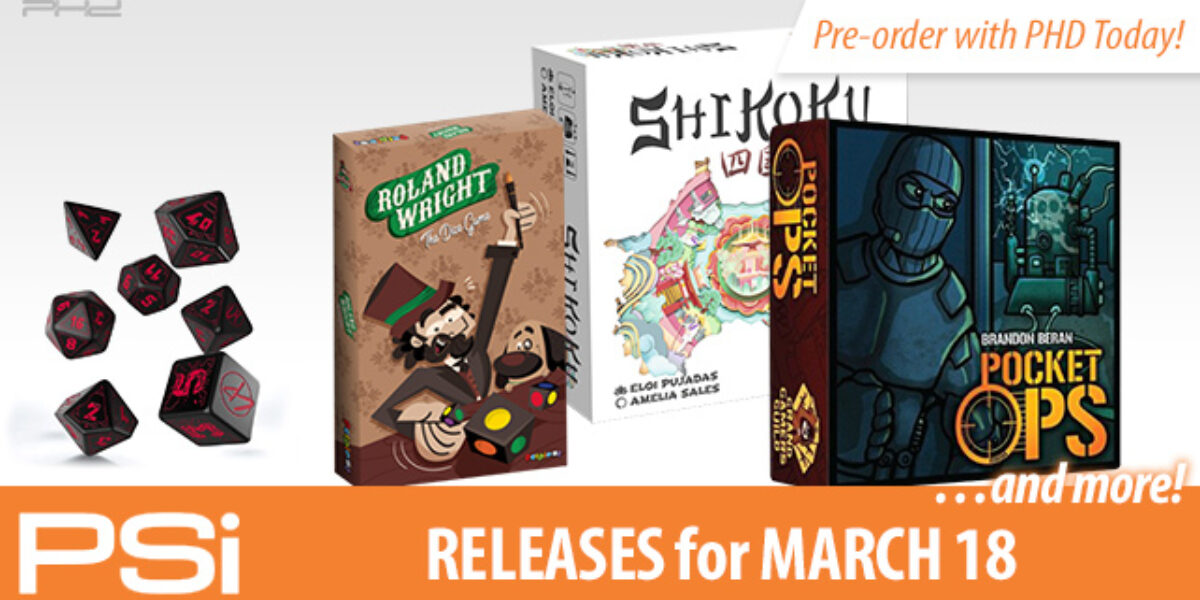 As Roland Wright, you play as a game designer obsessed with creating the perfect dice game. Pack as much inspiration and as many game hallmarks into the box as possible, while using equipment to speed up the design process. Be efficient in order to make the Game of the Year Awards submission deadline! Read more in our full Roland Wright: The Dice Game article.

The world has collapsed—Corporations won and have thrown their weight around. All that is left is a sense of style, your wire necessary for surviving, and toys like guns and this dice set. That is your little helper on your way through Night City, and remember: One roll can change all. It can even make you the cyber-hero from zero!

What should you do if you have too many dice? (Well, that’s silly, because you can never have too many dice!) But what you could do is pick up this dice bag! This striking (and roomy) Cthulhu-themed dice bag will help you keep all those treasures right at your fingertips.

The drawstring bag is made of green fabric, lined with black satin, and holds more than 100 assorted dice! This Cthulhu-adorned 6″ × 9″ bag will be a valuable addition to your next game day, no matter where you play!

The bag comes with a 19mm Cthulhu d6—yellow with green pips. The bag has the same artwork on both sides. It’s a dice bag; you know what to do.

With a big meeple replacing the 1 pip, and little debossed meeples on all the other sides, the Meeple d6 Dice Set blurs the lines between meeples and dice. This is for use with any game that requires standard six-sided dice. Each pack includes eight 16 mm dice of the same color, with four colors previously available (red, green, blue, black) and two more now joining the lineup! Mix and match them at your friendly local game store.

Pocket Ops is a two-player game of deduction and area control. As rival spymasters, position your agents to outmaneuver your opponent and dominate the battlefield.

Built on the tic-tac-toe framework that everyone knows, players must stay one step ahead of their opponent. The battleground is as much in the minds of the Spymasters as it is on the board. Predict your opponent’s moves to prevent them from gaining ground, and when all hope seems lost, snatch victory away from your opponent with clever use of your elite agents: the Assassin, Sniper, Pusher, Grappler, or Hacker. If you are the first to capture both parts of the doomsday device, it’s game over for your opponent!

Shikoku is the smallest of the four main islands of Japan and famous for its 88 Buddhist temples pilgrimage. It is said people have a year of misfortune and woes—at the age of 42 for men and 33 for women—so to be cured and avoid bad luck, pilgrims of those ages attend the temple 23 called Yakuōji and place of the Buddha of healing, Yakushi Nyorai. In every step, pilgrims leave a coin while singing the Yakushi mantra, which favors them with spiritual healing and prevents misfortune.

In Shikoku, players play the role of pilgrims who are going up the 33 steps while singing mantras until they reach the pagoda. However, the “Middle Path” seeks moderation, not the extremes—to be the first one, or the last, is not welcome! The winners will be those who are second or next to last on the steps when a player reaches the top.

Unfair is being re-released from the original publisher, Good Games Publishing.

Build, bribe, and blackmail with all the fun of the fair! Unfair puts you in charge of building the city’s best theme park, whatever it takes. But watch out—your competitors may pay off safety inspectors to close your rides or hire hooligans to vandalize your park! Build wisely, and protect your park to make sure you come out on top! Unfair is perfect for mid-weight strategy gamers looking for flexible and strategic gameplay and unparalleled replayability. It works well for couples and as well as for regular game groups. Read more about Unfair and Unfair: ABDW in our full article.