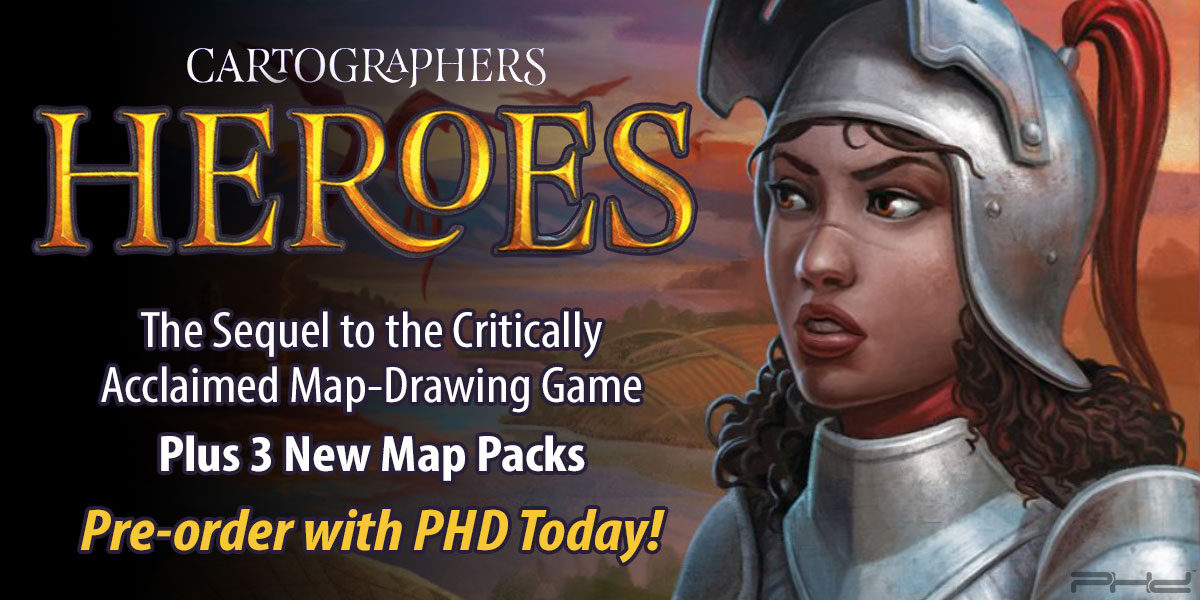 The expedition to the Western Lands is the kind of honor that comes once in a lifetime for a royal cartographer. But these are dangerous times. War ravages the land, and you are sure to encounter Dragul forces determined to thwart Queen Gimnax’s plans for western expansion. Fortunately, brave heroes have risen to the defense of Nalos and will chart their deeds alongside the queen’s edicts and secure their place in history.

Cartographers Heroes is the sequel to the critically acclaimed map-drawing game Cartographers. It includes all-new map sheets, scoring cards, explore cards, and ambush cards with unique abilities. Cartographers Heroes can be played on its own or mixed with components from the original game for a greater variety of gameplay possibilities.

It is rumored that the forges of the ancient dwarves were connected by magic to the great volcano Astmork. As a royal cartographer, you are eager to see for yourself. Now, you stand before a mountain that belches flame into the smoke-blacked sky of another world. This map could be the key to great fame and glory if you can avoid the rivers of molten lava long enough to complete it.

This map pack can be played with either Cartographers: A Roll Player Tale or Cartographers Heroes.  It includes 75 double-sided new map sheets featuring a volcano space and 3 volcano cards, which are shuffled into the Explore deck. When volcano cards are revealed, players draw destroyed spaces on their map sheets recording the damage the volcano is inflicting on the land.

When a rift opened and strange creatures rode through on their bat-like steeds, you knew you’d only have one chance to map this plane. You leapt through, finding yourself standing on a network of purplestone archways, rising from a vast, gray sea. Now, you pull out your level and compass and begin what surely is the greatest challenge of your career as a royal cartographer.

This map pack can be played with either Cartographers: A Roll Player Tale or Cartographers Heroes.  It includes 75 double-sided new map sheets featuring the purplestone islands of this world and 3 new scoring cards, specifically for use with this map pack.

Beneath Nalos’ capital city Sabek lies Undercity, a twisting labyrinth of corridors, caverns, and passageways, populated by local criminals and renegades living on the fringes of society. No formal study of its layout has ever been done. The queen has charged you with exploring Undercity’s depths: locating underground rivers, settlements, and the strange mushroom forests that bloom in phosphorescent caverns. The last cartographer never returned—but I’m sure you’ll have better luck.

This map pack can be played with either Cartographers: A Roll Player Tale or Cartographers Heroes.  It includes 75 double-sided new map sheets featuring above-ground and below-ground regions and 3 new scoring cards specifically for use with this map pack.