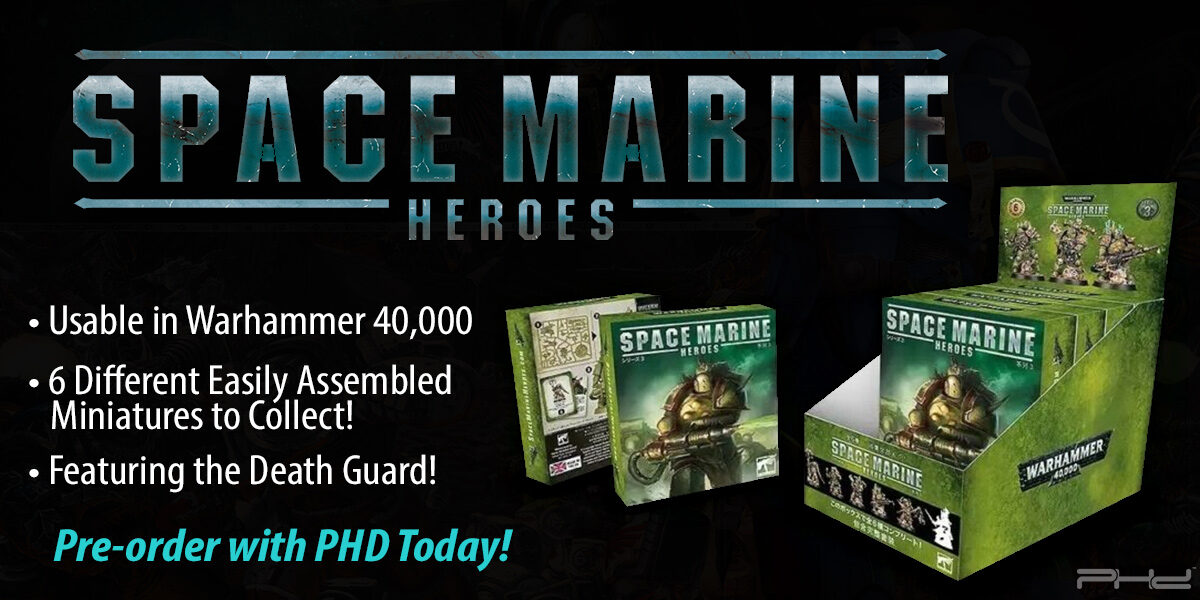 The upcoming third wave of Space Marine Heroes from Games Workshop features the the Death Guard, the Traitor Legion most favored by Nurgle, the Plague God. Utterly devoted to spreading their hideous diseases across realspace, they are living plague vectors whose bloated bodies boast grotesque resilience.

Each countertop display includes 6 miniatures, and there are 6 different miniatures to collect. They’re easy to assemble, as they’re push fit and push off the frame, with no clippers required. An assembly guide is included to show you how to build your miniature. Because it’s colored plastic, no painting is required. Each figure comes with two head choices—helmet or bare head—and comes with a sculpted plastic base to display it on that features a unique “Nurgling” character.
A collector’s card is included in each box, with picture of the painted miniature. The figures can be used in existing games of Warhammer 40,000. 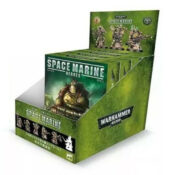 Morslug — Armed with a Plague Spewer, this Marine has various fungal growths growing up out of their head and backpack. The Nurgling on their base is reaching out with their right hand to grab the decay/fluid that is leaking out of the Plague Spewer, which they are looking to eat/drink.

Gurg The Foul — Armed with a Boltgun, the Nurgling on this miniature’s base is holding a skull, which has a Bolter round through it’s forehead. This ties in with the miniatures trophy rack on their backpack which has a skull on a spike. The miniature has an additional Nurgling which is hanging off a spiked mutation which is erupting from their right shoulder pad.

Kholerus — Armed with Boltgun, this Marine is posed ‘mid-throw’ of a Blight Grenade that they have in their right hand. Their left foot raised, to aid with distance. The pin of the Blight Grenade is still held in their left hand. They wear additional grenades across their chest. The Nurgling at their feet is looking upwards, waiting for the Marine to disgard the pin in order to add it to their collection of grenades/grenade pins that they have been collecting. 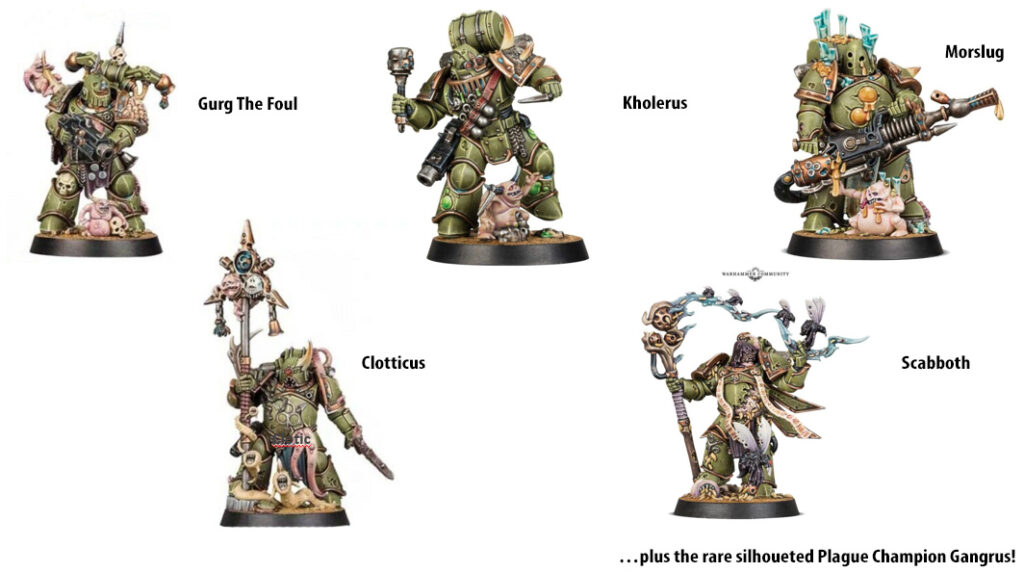 Scabboth — Armed with Flair of Corruption and Plague Sword (on their belt). The central censer of the flail has been removed, and replaced with a Nurgling.

Clotticus — Armed with Plague Sword and an Icon of Despair, this Plague Marine’s base has numerous Hagfish-type creatures on its base, with two of them starting to climb up the Icon’s base. These Hagfish-type creatures tie in with the tentacle mutation that the Marine has erupting out of the stomach.  They have two further mutations coming from their head, and their right shoulder. The mutation from the right shoulder can be seen spreading over the upper right part of their chest too. One of the three elements of the Nurgle symbol at the top of the Icon has been removed by a Nurgling that has climbed to the top of the Icon – the Nurgling is pushing their face through the space that has been created.

Plague Champion Gangrus — Armed with an archaic Plasma Pistol and Plague Sword, the Champion has a large maw mutation on its chest/stomach, as well as a face of a daemon on its left shoulder pad. The Nurgling at the Champion’s feet is ‘wielding’ some sewer piping as if holding an effective weapon, likely aiming to throw sewerage at the enemy. The Champion also has an additional Nurgling standing atop their backpack.