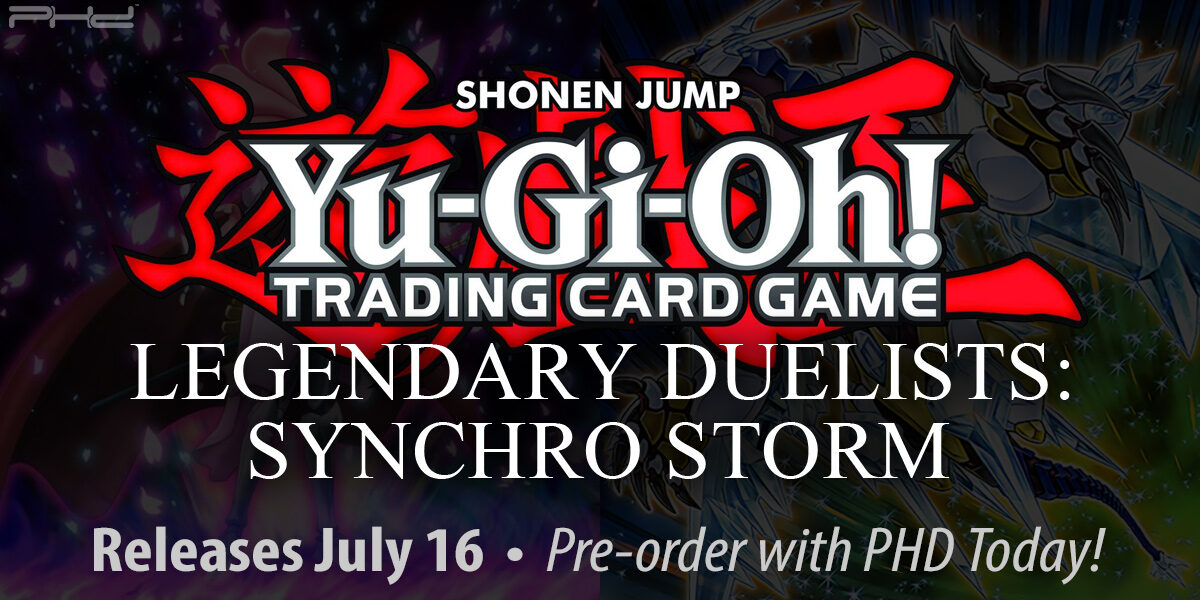 The winds of victory are swift and sure! Legendary Duelists: Synchro Storm powers up three strategies used by Duelists that specialize in WIND monsters!

First, appearing in Yu-Gi-Oh! ARC-V, Yugo’s “Speedroid” monsters excel at quick, consecutive Synchro Summons! Start off with Summoning his signature monster, Clear Wing Synchro Dragon, and then use the rest of your Speedroids to upgrade it into more advanced forms like Crystal Wing Synchro Dragon or even a brand-new WIND Synchro Dragon!

Originally released as videogame promotional cards, Sherry LeBlanc’s strategy is resurrected and revolutionized in Legendary Duelists: Synchro Storm! Hailing from Yu-Gi-Oh! 5Ds, Sherry’s cards specialize in fielding a single powerful WIND Synchro Monster. Her ace monster from the anime, Chevalier de Fleur, is a Level 8 WIND Synchro Monster that prevents your opponent from blocking your wind of victory by negating the opponent’s Spell or Trap cards during your turn.

Finally, Lulu’s Lyrilusc strategy from Yu-Gi-Oh! ARC-V flies back in with the new support cards! This strategy stacks up Level 1 Winged Beasts to Xyz Summon Rank 1 Xyz Monsters with as many Xyz Materials as possible. You can even combine them with “Tri-Brigade” cards from Phantom Rage, Blazing Vortex, and Lightning Overdrive to create a cool hybrid strategy!

Topping it all off, Legendary Duelists: Synchro Storm will include a hard-to-find Ghost Rare version of one of its coolest cards!

PrevPreviousD&D Icons of the Realms: Gargantuan Tiamat — WizKids
NextShards of Infinity: Into the Horizon — Ultra•PRO EntertainmentNext