Take a deep breath, and relax… You have come to the lake hoping to see a rare and beautiful sight. The lilies of the lake only open their blossoms in the rain, and only rarely do all eight kinds of lily bloom at once. The goal of A Gentle Rain is to place the lake tiles in such a way to cause all eight types of lilies to bloom before you run out of tiles and the rain ends. 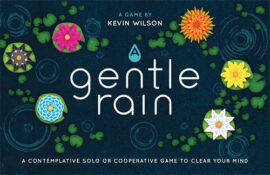 Place each new tile you draw next to a tile already in play, making sure to match the colors of all the tile edges touching the tile you are placing. Each time you manage to complete a square of four touching tiles, a blossom opens between them. Keep score—or don’t. 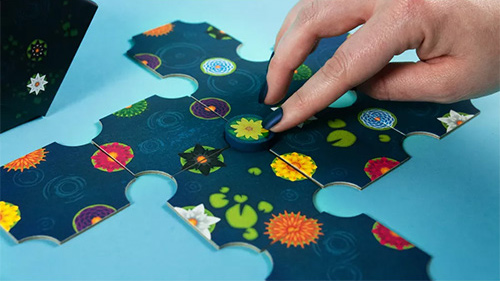 It’s the game of bluffing and puffing. From Forever Stoked Creative & Mondo Games, Stoner Parking Lot is the ultimate compact card-based grab-n’-go party game, where 3 to 7 buds break into teams and conspire to sneak out of the metal show for a little puff-puff-pastime…without alerting the other players who are looking to gank their dank. 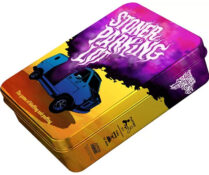 To accomplish this, players must first collect the essentials: weed, a mixtape, your trusty bong, a lighter, a six-pack, and—of course—pizza. Once they’ve collected all six cards, they’ll communicate with their partner using only the slyest of visual signals. If the other team catches on, they’ll want to join, but no way; you’ve got to bogart your bud, bud! The game is learned in 30 seconds and played in 15 minutes.

Stargrave is a skirmish wargame set in a dangerous galaxy, where players command a small crew of adventurers hunting for loot while trying not to call too much attention to their activities.

In a galaxy torn apart by the Last War, vast pirate fleets roam from system to system, robbing, extorting, and rounding up slaves. Any attempt to form any kind of central authority bigger than a city state is quickly and brutally crushed. In this dark time, the only way to survive is to stay small and inconspicuous. Amidst this chaos, however, thousands of independent crews manage to carry on their business. Smugglers, relic hunters, freedom fighters, and mercenaries roam the dead stars in small ships, scratching out a living anyway they can.

In Stargrave, from Joseph A. McCullough, creator of Frostgrave, players control these independent operators, recruiting Captains and First Mates from a range of backgrounds, each with their own skillsets and abilities. Their crews are made up of the toughest the galactic underworld has to offer —criminals, soldiers, hackers, and adventurers from a thousand different worlds. In both one-off games and ongoing campaigns, the crews will be tasked with a variety of missions, from the recovery of lost technology to data heists and, perhaps, even striking back against the pirate fleets. Will their victories bring them wealth and infamy, or are they destined to fall prey to the horrors that lie within the ravaged galaxy?

Flavor up your Munchkin experience with these 30 new monster, Treasure, Class, and Race enhancers! Enhancers boost the strength of Items, monsters, and the munchkins themselves, but beware! Your foes can turn them against you as well. Munchkin Enhancers adds more power, more challenge, and more backstabbing fun to your games!

We all know that gamers love buying more dice. And we all know that gamers need places to store their new dice. When those gamers are Munchkin fans, what better option is there than a Munchkin Dice Bag? These 7″ bags are perfect for anyone who loves Munchkin, with classic art on the outside and satin lining on the inside. Store it with your Munchkin games or your dice—or both! 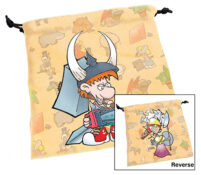