Impressions Releases for May 25

Your home world is running low on resources. To survive, you send teams of workers to a nearby resource-rich planet, but one with a harsh and inhospitable environment. Will your teams outperform the others to build the best mining colony?

Help save endangered butterflies! Construction projects in your city are disrupting the natural butterfly habitat. Capture butterflies and deliver them to protected butterfly gardens in local zoos, botanical gardens, and museums. 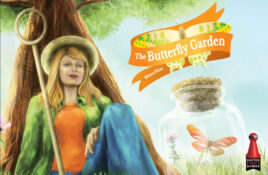 Welcome ashore! Merchants Cove is a highly asymmetrical Eurogame in which each player assumes the role of a different fantasy merchant with a unique shop. The merchants contend to sell their goods to the arriving adventurers at the cove’s piers—the most famous markets in the Five Realms. Each player uses their own set of role-specific components and gameplay mechanisms to produce their goods, increase their shop’s efficiency, and—most importantly—get rich!  Though the merchants work independently in their specialized shops, they compete against each other to attract customers, influence the demands for goods, and secure sponsorships from the four faction halls. To get an edge, merchants can employ local townsfolk to work in their shops as staff. Or if they dare to cut corners, they can gain leverage from the corrupt lair of rogues—but at what cost? After three days of selling at the markets, the wealthiest merchant shall be declared the winner! 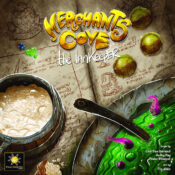 The Secret Stash is a treasure trove of goodies that can be added to Merchants Cove. It features a variety of modular expansions you can mix and match to create fresh experiences. It also introduces new content for playing solo: a book of 12 thematically-driven scenarios, and a deck of solo challenge cards.

The Innkeeper is a new merchant you can play as. It is centered around a speculation game, where you try to prepare rooms for the most common adventurers in play at the end of each round. If you plan well and satisfy your guests, you can yield an ever-increasing income. However, if you fail, you can expect brawls to break out—which can hurt your business!

The Oracle is a new merchant you can play as. It is centered around a roll-and-write-style game, with a pen, dry-erase board, and custom dice tray. Each turn, you throw a handful of runes (a coin, bone, voodoo meeple, and dice) into a divided dish and then record the results on your board in various ways to perform actions—and predict the future!

The Dragon Rancher is a new merchant you can play as. It is centered around a mix of bag-building and mancala-style mechanisms, where you draw food and drop it on your board, piece by piece. Once food is placed, the young dragons can follow the trails—and grow bigger with every bite!

In Drawn to Adventure, you and up to three other adventurers will embark on an epic journey across the Five Realms, where you can use your skills and abilities to slay monsters and complete quests. You will have the chance to earn many rewards, such as mana to activate special powers; experience to level up your character; and—of course—glorious treasure! Drawn to Adventure is a campaign-driven, roll-&-write game. Each player uses a dry-erase flip-book that contains six different hex-grid maps. Campaigns are played over three of the six maps. After the third map is finished, the player with the most treasure wins. So grab your mighty pen and come along; fame and fortune await those who are truly Drawn to Adventure! 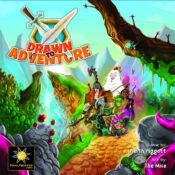 Nothing beats the creativity of a Supernova Die! Each die has the high and low numbers centered on each of the two colors for high-speed number recognition. Every set comes in the GKG Dice Tower Dice Case! Made of high-impact resin, with the same original layering process invented for Halfsies Dice in 2013 that prevents air-bubbles from forming inside, Gate Keeper Games dice bear the honor of being the heaviest, densest, and most well-balanced resin dice on the planet!