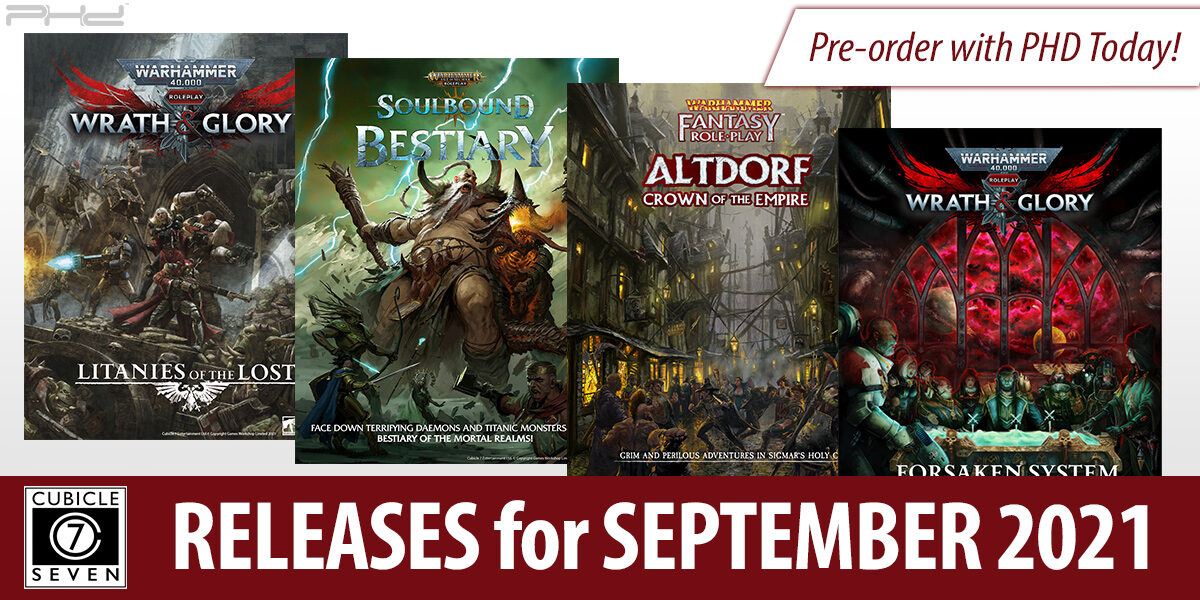 Explore a system forsaken by the great rift. Cut off from the might of the Imperium by the Great Rift, and beset on all sides by the daemonic forces that emerge from the tear in reality, the Gilead System stands as a bastion of faith in the Emperor. Unable to call for reinforcements or escape the System, the citizens of these planets fight to preserve the Imperial Creed as they battle back the vile xenos, corrupted renegades, and foul daemons that assail them. But even as the Imperium’s diverse factions unite in this time of desperation, the rifts between them grow. With the Emperor’s watchful gaze obscured by the Great Rift, powerful opportunists pursue their own goals, and reignite old rivalries. The grim worlds of the Gilead System are rife with intrigue, betrayal, and secretive plots.

Altdorf: Crown of the Empire is a fascinating and entertaining 224-page guidebook to the capital. Standing on the confluence of two of the greatest rivers in the Empire, Altdorf is a nexus of power: government, religion, magic, and military. Each district is carefully detailed with a wide variety of locations, plot hooks, and NPCs. A beautifully illustrated map, provided with both GM and Player versions, shows off the xpansive city in exquisite detail.

Altdorf: Crown of the Empire is extensively researched; combining details derived from over 30 years, including stories, sourcebooks, and roleplaying scenarios, with new material to create the ultimate sourcebook for thrilling adventures in the capital.

The Mortal Realms are besieged. Packs of savage beasts stalk the wilderness. Parades of disquiet dead stirred by baleful magics haunt the nights, enacting terrible vengeance upon the living. Hordes of Orruks, Grots, and Gargants rampage unchecked, driven by little more than destruction and despoilment for their own amusement. And the innumerable servants of the Ruinous Powers that once brought about the end of the world take root wherever mortals tread. The realms are rocked by never-ending conflict, and nowhere is truly safe…

Discover four grim adventures in the darkness of Imperium Nihius! Bathed in the corrupt light of the Great Rift, the Gilead System is rife with peril. Vile xenos assail humanity from all sides, internecine strife between the factions of the Imperium threaten a catastrophic civil war, and daemonic entities penetrate reality from Cicatrix Maledictum.

Discover devious plots and unravel murderous mysteries amongst feuding faiths on the agri world of Ostia. Investigate tech heresy, mechanical misdemeanors, and arcane rituals amongst the manufactora of the forge world Avachrus. Protect the holy shrine world of Enoch from enemies without—and traitors within.

Litanies of the Lost contains four exciting scenarios suitable for Wrath & Glory characters of Tiers 1 and 2. These can be played as entertaining standalone adventures or can be combined into a perilous planet-hopping campaign.